You are here: Home / Archives for great books

I wasn’t sure I wanted to read The Four Winds. The Great Alone was such an incredible novel, and I thought, how can she top it? That might be impossible, after all. Still, I couldn’t resist. The subject matter was compelling: the struggles of a family during the Dust Bowl.

The story centers around Elsa Wolcott, whose early life was defined by an illness and, in her family’s opinion, a lack of attractiveness. Expected to live at home and tend to her parents in their later years, Elsa had different ideas. Readers will find a young woman defined by both a deep sense of inadequacy and an innate wildness that will give her strength to endure tremendous hardship, though she won’t recognize the latter in herself for some time.

As in The Grapes of Wrath, Elsa will find herself migrating to California with her children to escape the Dust Bowl, where instead of finding milk and honey, she finds more hardship and bigotry. Californians weren’t impressed with the increasing numbers of migrants seeking work, so not only is work limited, but the pay continues to drop.

Hannah describes the conditions in excruciating detail. As someone who just finished writing a historical novel, I was impressed with her ability to take us there, not just as observers, but to help us truly feel the suffering and hardship of these difficult times.

In this painful reality, Elsa finds her inner strength, and that is the real beauty of this story. She is a reminder of the lengths most women will go to for their families, especially their children. I think I cried more during the small happy moments and the occasional humanity than the most difficult times.

I found the beginning a bit slow, and it felt as if the parents and future husband could have been more nuanced. Elsa seemed a bit like Cinderella, and the family a bit too much like the wicked stepmother and stepsisters. However, this part of the story was necessary to set up Elsa’s worldview, so I can forgive it. Elsa, Lareda, and Elsa’s in-laws are far more developed and interesting, and the story really picks up when Elsa leaves home.

The Four Winds is, sadly, too relevant for our times. The treatment of migrants, the inequality, the sense of endlessness of the Depression…all of these are visible now. In addition, the environmental crisis of the time, the Dust Bowl, is a sad reminder of what happens when we don’t care for our planet, and we see that in our current climate crisis. What is astounding to me is how long these travails went on…we are a year into a pandemic and going bonkers, while the main part of this story spans six years. How our fellow Americans endured this is beyond me.

Some reviewers have complained about the “political agenda” of the book, particularly the role of Communists in trying to organize the workforce. Yet what was she supposed to do, write them out of history? They were there, and they were trying to help. I did not see Hannah as “advocating for Communism,” as some reviewers believe. In fact, she uses Elsa to voice deep concerns and reservations about the philosophy. At the same time, by respecting their role in seeking better working conditions for the migrants, she reminds us that people are far more complex than Twitter would have us believe.

I highly recommend The Four Winds, and hell, anything else Kristin Hannah writes.

Did you know that the Bronte sisters, Charlotte, Emily, and Anne, wrote and published a book of poetry that sold only two copies? Though well reviewed, the book flopped. Even when they did achieve literary success, it came under male pseudonyms, and reviews after they were outed as females took a nosedive.

Yet Wuthering Heights and Jane Eyre remain two of the greatest and best-loved novels in history.

The Bronte sisters wrote together, and we can imagine them bouncing their ideas off of one another, but they also wrote wildly. Their stories were too “improper” to be written by women. Yet they couldn’t help themselves. In their regular walks along the Yorkshire moors, strolling through thigh-high fields of heather, they captured the passion and raw fury of winds and rain and exposure, stamping unforgettable settings and emotion in their work. They wrote true to their natures, and their boldness has kept their novels in the public ever since.

Recently I had the great privilege to walk the moors the Bronte sisters once did. I visited the home where they made history, looking at their tiny clothes (including Charlotte’s wedding bonnet) and pondering their lives. Of course, I came home with a stack of books to learn more about them. As always, it helped me as a writer to literally walk their path. A hike to Top Withens, said to be the inspiration for Wuthering Heights, brought the stories more deeply into my bones. 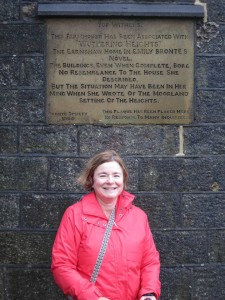 I don’t pretend to even come close to the skill of these authors. I do know, though, as I walk along the moors, absorbing the life and strength they emanate, I am adding to the files of my imagination. The Bronte ghosts tell me they, too, were merely human, and struggled to balance their unusual writing styles with the marketplace of the time. Their struggles are different, but we understand each other. I return to my own work renewed and inspired to continue.

In 2008, hubby and I went to Israel. Stunning and stressful, inspiring and frightening, the country showed its many sides to us as we explored it in our rental car. When I came home, I wanted to write about it, but how? Nothing I tried to write did justice to the experience.

Author Martin Fletcher, who walked the western coast of Israel the same year we were there, has written the stories that I couldn’t write in Walking Israel:  A Personal Search for the Soul of a Nation. A longtime journalist, Fletcher had covered many battles and skirmishes throughout the country. He felt that he was missing something, and walked the western coast of Israel in search of the “real” Israel. Along the way he interviews Jews, Israeli Arabs, soldiers, and more.

As Fletcher hikes along the coast, my own memories come flooding back. In one example, he writes about Acre, with its medieval walls, where Jews and Arabs live peacefully, for the most part. Just before our visit, though, some violence erupted when an Arab drove his car into a Jewish neighborhood on Yom Kippur (the holiest day of the Jewish calendar). As with all things Israeli, however, it’s complicated, and hubby and I had a nice visit in Acre despite the violence just a week before. Fletcher reflects on this incident, though it occurred several months after his walk, and notes how challenging it is to separate politics from daily life in Israel.

When Fletcher describes the northern town of Nahariyya, I remember meeting my first former Israeli soldier: a pretty waitress in a local cafe. Slim and slight, she recalled doing her military service when Lebanon was bombing Nahariyya in 2006. My stepson was in Israel that year, and we feared for his safety, but his group leaders moved them further south out of harm’s way. I realized again what should be obvious: no matter how intimidating or powerful, many armies are made up of young, fresh-faced kids just starting their lives.

There were so many contradictions and contrasts, too many to describe here. I am grateful to Fletcher for his ability to present them so clearly.

Fletcher doesn’t try to draw conclusions. His reviews are mixed because he hasn’t chosen one side or the other, but that’s why I appreciate it. It’s confusing and complex, and Fletcher doesn’t make it less so. He does, however, show the fascinating and frustrating land of Israel in a way that made me nod my head and say, “Yes, yes, that’s it. That’s what I couldn’t find the words to say.”