You are here: Home / Archives for banned books 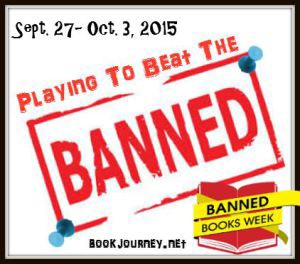 This is Banned Books Week. Thanks to Sheila at Book Journey for bringing together a group of bloggers who are writing on this important subject this week. Feel free to pop over to visit her site.

Many years ago, while browsing in an indie bookstore in Albuquerque, a book nearly fell on my head. It was Sherman Alexie’s The Lost Ranger and Tonto Fistfight in Heaven. I loved the book as well as the movie made from it, Smoke Signals. Sometime later in Houston, Alexie spoke and held a book signing, and I was one stuttering, tongue-tied lady as I handed him my books for signing.

So I was surprised to find The Absolutely True Diary of a Part-Time Indian on the Frequently Challenged Books List, and it seemed like a good one to investigate.

A semi-autobiographical account of Alexie’s younger life, the book follows the story of Arnold Spirit, aka Junior, who decides he wants to go to school off the reservation. As he deals with bullying, culture clashes, family alcoholism, and violence, he keeps his sense of humor by drawing cartoons (Ellen Forney provides the illustrations).

Why is it a controversial book? Several reasons are listed, including violence, profanity, alcoholism, and slurs about mental disabilities. It’s also considered by some to be anti-family and anti-Christian.

In spite of the controversy, Alexie has received numerous letters from students who understood the depression and despair in the book, who felt they were helped by Alexie’s words.

Alexie writes, “I went to high school with a bunch of extremely conservative Republican Christians (in other words, the kind of people who generally seek to ban my book) and let me tell you–those conservative Christian kids and I were exactly alike. I was publicly inappropriate, they were privately inappropriate. All this stuff that is controversial is stuff that kids are dealing with on a daily basis.”

As someone who came to parenting late (I married into a family with twins who were high school seniors), I haven’t had to face concerns about what my kids are reading. There are definitely some difficult and challenging themes in Diary. To me, though, it’s an opportunity for discussion…not censorship.