Our NYC adventures continue! Grab a cuppa and join me as we talk about tea.

There’s nothing like a nice cup of tea in late afternoon, after the day’s work is done. And, as we’re discovering, our East Village neighborhood is loaded with places to drink all kinds of tea, from organic herbals to bubble tea to the real deal, as we found at Tea Drunk, a local establishment.

Tea Drunk offers genuine teas, hand harvested from China. The menu is extensive and not cheap — fine tea ranks right up there with fine wine. With all the options available, we opted to do a tasting.

We selected the fall teas, which included a yellow, white, and oolong. The menu admonishes: no herbal teas here. Personally, I love herbals and drink them all the time, but I was eager to sample the genuine teas. 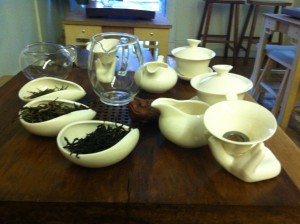 We were each presented with three tiny cups. Our server poured boiling water into each of the teas; the first steep is discarded. We then sampled each of the teas. Periodically he would come around and do yet another steeping. With each one, the flavor of the tea awakened more and more.

To steep the tea, he poured water in, let it sit for just a moment, and then strained it into little pitchers. I was surprised to find the teas full of flavor, even with the “instant” steeping.

I asked what makes tea black, white, green, or yellow. He explained that the leaves are the same, but they are processed differently. Green tea is heated immediately upon harvest, making it the freshest of the teas. White tea is not heated at all, while the oolong is heated but undertakes several shakings to wake up its enzymes.

By the end of the leisurely tasting we were relaxed yet happily buzzed from the caffeine (not great for sleep, but oh, well) and learned more about real tea. No doubt I will return to sample one tea at a time, to get to know them better!

Nadine Galinsky Feldman is the author of The Foreign Language of Friends and the upcoming What She Knew, available March 2016. If you enjoy this blog, please consider purchasing a book or signing up for the newsletter to be kept informed of upcoming promotions and giveaways.

A few days ago we were sitting outside at Cafe Orlin, enjoying our weekly “date lunch.” Sitting next to us were two young men talking business. Their voices threatened to drown out our quiet conversation.

As a writer, though, my ears perked up during a brief exchange that sounded like a faint, uncertain gay proposition. “Oooh, I thought. Material.”

About that time, a bicyclist had a confrontation with a car. He seemed more shaken up than injured, though his bike didn’t fare so well. Someone noticed he had dropped his cell phone in the street during the melee, and the cafe customers mustered their voices in unison to tell him.

Stories, stories, stories everywhere. In my daily East Village adventures, they jump out at me from street corners, drop down from the sky, swirl among the fallen autumn leaves. Some are funny, some are sad, all are interesting, and my creative well is filling more and more each day.

We’re always looking for good stories, and that includes those found in the theater. Having visited many times in the last several years since our daughter moved here, we have enjoyed many productions. Over time, though, I’ve grown restless with Broadway, which is forced for economic reasons to play it safe. There are always the shows that poke fun at the Broadway beast, self-conscious musicals that, like Kardashian mirror selfies, get tiresome after the first thousand or so.

Because we’re spending five months in NYC, we are looking for off-Broadway productions, good stories, works in development, the hidden gems of a city with boundless creative energy.

Our first show did not disappoint. Barbeque is a dysfunctional family drama with a big twist that’s revealed just before intermission. It begins with parallel stories of a black family and a white family having barbeques in the park. The barbeques are a subterfuge, though, with the real intention to stage interventions for a drug-addicted sister. The rest of the family members are ill-qualified to conduct the interventions, patterning them from a television show.

At first, I struggled to accept the concept of intervention as fodder for comedy. The story comes across, at first, as more sad than anything, and not funny at all. However, when the cast reveals its twist, things get interesting, and the second half amps up the volume. Our laughter is sometimes painful and often self-conscious…but we laugh nonetheless.

Barbeque, performed at The Public Theater, is quirky, strange, and fun — a worthy first outing in search of good, original work.