You are here: Home / books / The Badass Trinity Part I: Shonda Rhimes 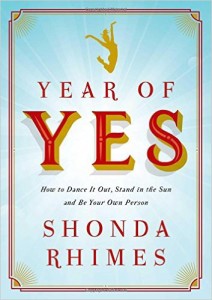 Note that the badass is listed as a “he.”
Yet television writer and producer Shonda Rhimes has carved her own path, reaching the pinnacle of television success in an environment that continues to limit opportunities for women and minorities.
This success, however, is not what makes Shonda Rhimes a badass. It’s the way she confronted her self-imposed limits, which had taken her joie de vivre from her.
In her new book Year of Yes, Ms. Rhimes tells of a moment when she realized her life had become too much about work and not enough about play. “You never say yes to anything,” her sister said…so Rhimes decided to say yes to everything that scared her. And, though Rhimes is a first-class badass, she’s scared by a lot. She considers herself shy and introverted, so speaking in public, as she did at the 92Y a few weeks ago, is a challenge.
In a book that is often laugh-out-loud funny, Rhimes writes the way she would talk to a friend. She reflects on speaking at graduation ceremonies, interviewing with Oprah, and more. In the Year of Yes, she learned to say “yes” to saying “no.”
As the year passed, with layers of shyness removed (along with a lot of excess weight), she blossomed…and she tells us we can, too.
The Year of Yes wasn’t always fun and games. Sometimes she had to say “yes” to ending friendships that weren’t as healthy as she imagined them to be. Saying yes often brought pain and discomfort.
But a badass always prevails.
Stay tuned for more badassery from authors Elizabeth Gilbert and Cheryl Strayed.
Nadine Galinsky Feldman is the author of The Foreign Language of Friends and the upcoming What She Knew, available March 2016. If you enjoy this blog, please consider purchasing a book or signing up for the newsletter to be kept informed of upcoming promotions and giveaways.
Share on Social Media
twitterfacebookpinterestlinkedintumblrredditemailwhatsapp
Follow us on Social Media
twitterfacebook

Your post is quite provocative! Do you put you in the “Badass” category? This does make me think… interesting. Thanks… now I have to ponder this for a while! 😉

Well, now, there’s a question! Yeah, I think I am. Even though I’m a scaredy cat at heart, I have always let my curiosity lead me to new adventures and a way of life different from most people I know. It feels a bit egotistical to claim the label, but…yeah…I think I will.

Yay! The Grey’s Anatomy lady. I always think what a lovely name she has when it comes up in the credits, but hadn’t been inspired to look her up till I read your post. Good luck to her.

I’ve only seen a few episodes of Grey’s Anatomy, though I’ve watched quite a bit of Scandal. It’s interesting to hear her speak. She confesses to being uncomfortable, and she comes across as reserved…but has a lot to say.

I wouldn’t consider myself a badass. But Shonda Rhimes definitely is. I’ve heard tales of the yes thing before. Haven’t read this book, though.

It’s a fun read as well as inspiring. I’m not a big fan of hers, but I really enjoyed this book.

[…] on to Badassery. Last week I posted Part I, in which I opined on Shonda Rhimes’ Year of Yes. This week, I feature another Badass: Elizabeth […]