It’s time for another “first Wednesday” posting of the Insecure Writers Support Group. On this first Wednesday of each month, we share our insecurities and hopes with each other “without appearing foolish or weak.” Please join us! 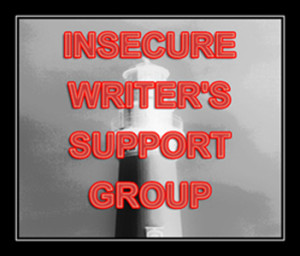 I thank Alex J. Cavenaugh for creating this group, and invite you to visit his website as well as those of our illustrious co-hosts: TB Markinson,Tamara Narayan, Shannon Lawrence, Stephanie Faris, and Eva E. Solar!

Recently someone asked on Facebook: NaNoWriMo, yay or nay? It invited a lively discussion. Since NaNo is just a few weeks away, I thought I would weigh in…especially since we’re talking about insecurities today, and NaNo seems to bring those up in a big way.

NaNoWriMo, for those who don’t know, is National Novel Writing Month. Held every November, it’s a writer’s version of the Boston Marathon, where we hunker down and produce a 50,000 word novel in 30 days.

I love using NaNoWriMo for first drafts, because it forces me to kick my inner censor out of the way. I also like the idea of joining with other writers who are doing the same thing. We root for each other, and give each other encouraging words when one is struggling (much like IWSG).

Critics of NaNo say new writers can be intimidated or overwhelmed, and yes, I’ve seen that happen. To that I say: NaNo will bring up your “stuff.” It will ferret out all your doubts and insecurities. If you understand what’s happening, it’s possible to move through those doubts and become more productive with your writing.

Others criticize NaNo for perceived rules. There’s only one: try to write a novel in 30 days. If you’re working on nonfiction and want to ride on the energetic coattails of NaNo energy, go for it! If you want to do a rewrite of an existing work but want the support, do that, too! There are “rebel” groups within NaNo you might want to find.

A few days ago someone was stressing because she didn’t have a book cover to post on the NaNo website. I’ve never done this! If you have a cover, great. Otherwise, don’t worry about it.

And if you don’t write 50,000 words? So what! This is your NaNo. Do what you can. Life happens. Sometimes the draft just doesn’t work. It’s fine. Some people don’t “win,” but they ended up writing more in a month than they ever did before. That’s great — and it’s enough!

If you’re a planner, yes, you can write character sketches and plot outlines. In fact, many people do a lot of preplanning.

And if you don’t want to do NaNo, that’s cool, too. You don’t have to diss it because you’re not interested, or your second cousin’s neighbor’s uncle did it and had a bad experience. Just say no, thanks, and move on. No need to knock those of us who choose to do it.

I don’t know if I’ll “win” this one by writing 50,000 words. I will show up every day at the page and do my best. I’ll engage with others on the site and soak up the support. I may even hook up with some in-person write-ins.

Showing up. Doing our best. Writing daily. Detaching from the outcome. Those principles, to me, are the real “win.”

I’ve done nano for the last two years, and “won” each time. This year I’m concentrating on finishing one of novels I started there! I think you have hit it on the head with this post. It’s YOUR nano. Do with it what you must/will…. It is a GREAT tool. Use it as one. Forget all the rest of the drama. It’s a tool. How you use it is up to you!

“Forget all the rest of the drama.” Yes! Great advice for NaNo and life in general, I think! Good luck with your NaNo, and congratulations for making it your own.

People actually have book covers ready for NaNo? Never heard of that. I think it’s a great opportunity for many as long as they don’t get caught up in the drama. 50,000 words, 5,000 or even 500 is better than none. And first drafts always suck. It’s best to get them done quickly and then rip into them.

I noticed previously when people posted book covers but never thought anything of it. I certainly never felt pressure to post one. It’s too soon. And I agree with you…let’s applaud any words that get written in November, regardless of the quantity. For many years I talked about writing but didn’t do it, so for my younger self 20 years ago, 500 words would have been a huge triumph.

Oh, I’m doing NaNo and I’ll smile and freak out at the same just like every year. What fun. 🙂

Anna from Elements of Writing

I love it! Yeah, let’s keep smiling even as we’re freaking out. Come December 1, we’ll celebrate what we accomplished.

Oh, I almost forgot November was coming up. I sit and watch NaNo from the sidelines. It’s not the way I work, so I don’t do it. But I cheer on those that do.

I think that’s the right attitude! Know thyself and do what feels right for you…I don’t do it every year. This is just the right timing for me and I feel like it.

I miss NaNo. It was a lot of fun! I always seem to be in the middle of revisions when it comes along.

That’s what happened to me in the past few years. I’m excited to be back! I think we do it when the timing is right. I can’t imagine doing it every year.

Right you are. Showing up and writing is the real win, not the word count. I’m still undecided, well maybe 50-50/60-40, that I’ll participate. Regardless I’ll be cheering the other participants.

It’s definitely tough to decide. I realized last night that I’ll get my next round of edits back from my editor right about the time NaNo begins…which could make things interesting. We should be down to final polishes by then, but one never knows.

If you join us, look me up!

Bravo! I hated Nano until I saw what it did for me. Both my Nano books have been surprisingly clean. I’ve had more agent requests for one of them than any other…I think not being able to take a long break while I’m working on a novel makes my work stronger.

It is tough, though. I always get behind and have to fight to catch up.

Good luck! Feel free to friend me if you like…I’m KickboxingWriter. We can cheer each other on! I’ve never gone to an in-person write-in, but I’d like to.

I love hearing a good success story! I will look you up on NaNo.

Great post. You wrote: Showing up. Doing our best. What great advice. My RWA chapter does a monthly mini-version of NaNo. We set our goals, cheer/support each other. Isn’t that what we all need? Good luck with this year’s NaNo.

That kind of ongoing support is fantastic! I applaud your RWA chapter for being so engaged.

I have loved following along with all of the participants of Nano but I’ve never jumped in. I am considering participating this year, and you have done a great job convincing me it’s okay to participate in my Nano…

Definitely stay true to what you need. You can’t do it wrong!

You’ve ALMOST convinced me to do a NaNo… I’m sooooooo undecided.
Gotta do it sometime… at least once in a writerly lifetime…

Hmmmm, a fence sitter! Well, you have a few weeks to decide. It’s cool either way!

I did NaNo for the first time last year, with a one word idea that I thought of on Nov 1st. And I loved it. That sci fi novel is in the final throes of polishing. This year I’ve tried to plan, and it just hasn’t worked for me. So I’m going to get to Nov 1st, take the seed of the idea that I’ve got and just run with it. So, yes, go with what works for you, and be prepared to change your mind and try something else if the fun goes out of it.

Great point! I’ve always been a “pantser,” but this year I’ve done more preparation, including a loose outline. Of course, once I start writing I may throw that all aside…but I think our stories tell us how they want to be written, and if we listen, we’ll go on a great ride.

I love NaNoWriMo. It can be wonderful for habit building. I’m thinking of doing it as a “rebel” this year to rewrite the next draft of my novel.

Great! I love the rebels!

I love your winning attitude about NaNo! 🙂 I won’t be doing NaNo this year because I’m kind of swamped by revision work, but it’s a contest that I love. It helps me get through my muddy middles in stories, and I always gain a new perspective on story I’m working on in NaNo, even if I don’t win.

Thanks! I hope your revision work goes well. I’m trying to get a bunch of revisions done on my current WIP before NaNo starts, and they’re taking longer than I expected. I’ll get there, but these next few weeks are crazy.

I’ve attempted NaNo twice. The first time was a disaster. Yes, I still have to clean up the draft and that was from 2009. The second time, I got 20K in and said forget it. Too much life happening. Maybe if I didn’t have kids or home school or celebrate Thanksgiving or do anything but write… I like to let my writing develop more organically.

It’s true that life can get in the way. We all have to do what’s best for us, and obviously NaNo isn’t right for you.