You are here: Home / Uncategorized / H is for Hyacinths #AtoZChallenge 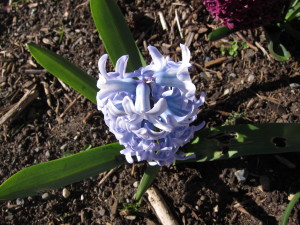 The hyacinths came early this year. Normally they bloom in late March, but this year they showed up in February while we were out of town. By the time we came home, some were already past their prime.

So far, the deer leave the hyacinths alone, though they can develop a taste for plants they supposedly don’t eat. I was told they didn’t eat lilacs, either, but once the leaves come out, it’s not unusual to see a few youngsters chowing down. They manage to bite the blooms off the tulips, so all we see each year are the bottom leaves. We’ve recently fenced the front yard, though, so we’re nipping that problem in the, ahem, bud. Literally.

According to The Flower Expert, hyacinths symbolize playfulness and constancy. They can also represent jealousy. Why? Because Hyacinth was a Greek god.

In Greek Mythology, Hyacinth was a beautiful youth loved by both Apollo and Zephyr, who developed quite a feud over the young lad. In one version of the story, Zephyr kills Hyacinth as a result of jealousy over Hyacinth’s fondness of Apollo. Rather than allowing Hyacinth descend into Hades, Apollo turned him into a flower.

Regardless of the hyacinth’s dramatic backstory, I enjoy watching their deer-repellant blooms in my front yard, a signal of spring.

Very pretty. Around here, the most often heard complaint is of deer eating the peas out of gardens.
My Blog: Life & Faith in Caneyhead
I’m Ensign B with Tremp’s Troops
of the A to Z Challenge

I can’t blame them! Peas are tasty. They’re one of my favorite things to grow…when I harvest them, I just open up the pods & eat ’em right there.

We just planted a few and are hoping they will bloom in May.
I had no idea of the history of the name.

I hope you have good luck with them! They’re so lovely.

I love Hyacinth’s. Their scent is Easter for me.

Beautifully put. Thanks for visiting!

Very beautiful. I love it that they represent playfulness. I think I need to plant some hyacinths.
Play off the Page

They do make us smile!

aww… can’t wait for mine to bloom!!!! they smell so nice!!!!
maybe sometime at the end of May, the way the weather goes… 🙁

May you have lots of sniffy, colorful blooms!

Great post. I love seeing the Hyacinths bloom. I also enjoy seeing the deer. It is so funny that Port Townsend has so many deer and I live out in a wooded area and I don’t see deer. Of course I don’t have any Lilacs in the yard either… but I do have Rhodies.

That is so interesting! The deer seem to leave the Rhodies alone, though…for now!

I love watching Hyacinths, tulips, crocus’s and daffodils come up in the spring. Ours are just coming up right now. So exciting!!

My mom always planted flowers, but this was one she never did. I wonder if maybe it didn’t grow well in Michigan.

It’s possible. Our temps here are on an even keel, never too hot, never too cold. Ours bloom in April (though March this year), but others are reporting blooms in May.

The name Hyacinth always reminds me of the TV character Hyacinth Bucket, from the British sitcom Keeping Up Appearances, who insists that her surname is pronounced “Bouquet”.

I don’t know if you’re familiar with that show? In the show she portrays an obsessive and determined snobbish middle class woman of working class background…
She’s a real scream! 🙂

This sounds like fun! I need to find this one. We watch all our TV online, so we’re always looking for a good series. Bouquet, Bucket…hilarious.