You are here: Home / gardening / G is for Grapes…Sour Ones, Anyone? #AtoZChallenge

We’re moving along in the AtoZChallenge! For more great blogs, visit the AtoZ page!

We’re thinking about vines. Lots and lots of vines. Maybe some grapes. 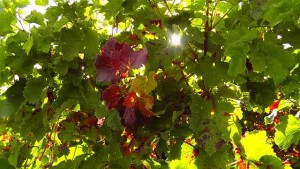 I’m told we can grow some nice table grapes in this part of the country. There are a lot of wineries in Washington State, too, and more and more grapes are being grown here. They’re pretty to look at, and they would add even more food to the “food forest” I’m trying to create in the yard.

Vines are also a pretty way to keep nosy — and litigious — neighbors away.

A City right of way with a walking path forms the north boundary of our property. People walk up and down the path throughout the day, often with their dogs.

Most of the time, our interactions with locals on the path is pleasant. One day a group of kids knocked on our side door to ask if we minded if they played on the path. Given we are longtime city folk, we were impressed with the attitudes of small-town pre-teens, who actually cared what we thought.

We live on a hillside, and our property slopes downward in the back. Three years ago we turned the slope into terraces and planted flowers. We thought it would be nice for people to enjoy the flowers as they traversed the path.

We did not count on our downslope neighbor suing us.

It’s a long story, and because litigation is involved, I should say as little as possible. I’ll say only that in two separate court actions, he withdrew his complaints before having to answer questions. That should tell you something.

Meantime, curious neighbors sometimes walk the path, gesturing to our walls and saying God knows what. It’s a small town…and after his attempts to get people to sign petitions against us, and demands for a “pitchfork and torches” public hearing, he’s probably influenced a few people.

“You have more support than you know,” one man told me. Another kind person knocked on our door to introduce himself and offer to help. We’ve received cards in the mail expressing support. Apparently attempts to influence others against us aren’t going so well. 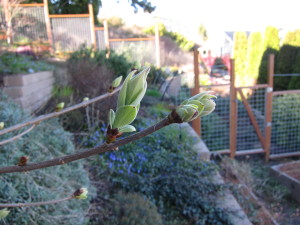 Still, I don’t trust a small-town grapevine…not one bit. Unless it’s grapes I can eat.

So forgive me if I plant some vines, maybe some grapevines, to create some privacy. We’ll enjoy the fruit. Maybe we’ll drink the wine to toast the new peace in the garden.

Yeah, works for me, too!

Well, I’m laughing… you definitely live in a small town! There are many characters in Port Townsend. However, no matter what size town one lives in… grape vines definitely CAN COME IN HANDY!! I could have used a few in years past. Thanks for the fun post.

Yep, I warned my husband about small towns before we moved here…I grew up in them, so I was prepared.

It sounds like you have quite a bit of support. Perhaps this neighbor isn’t so popular in the town…

He isn’t. He’s sued a number of people, while others go along with him because they’re scared of him.

I like the sweet seedless grapes – especially the dark reddish ones… yum! 🙂

Of course a sweet rose’ wine is always welcome.