You are here: Home / travel / About that Train Thing…

What is it about trains that grabs me?

My first train memory was at Silver Dollar City, an amusement park in Branson, Missouri. As part of the train ride, “bandits” boarded the train and demanded gold. As a little kid, I was terrified. “Give ’em the gold, Mommy! Give ’em the gold!” I’ve never forgotten it, nor has the rest of my family, who manages to bring it up now and then, about 50 years later.

The next ride that I remember (there were others that I don’t) was from LaSalle/Peru, Illinois to Chicago. A group of us girls, led by one of my teachers, went to the Art Institute and took the train. When we got off the train and went to the restaurant, I got sick to my stomach from the motion.

A few years ago, en route from Rome to Naples, we took the fast train, but it was so crowded that we had to sit on the floor in the vestibule. When we switched trains in Naples to go to our final destination of Sorrento, some thieves managed to grab hubby’s iPhone and a credit card.

You may be seeing a pattern here. And yet, in spite of my misadventures, I still love trains.

Last week we had an interview at the Washington/British Columbia border for our Nexus cards, which will allow us to get in and out of Canada quickly. While there, we decided that since we could see the border from the Nexus office, we might as well cross it! Off we went to Vancouver for a long weekend.

Vancouver is a nice city, but cities in general don’t hold great appeal to us. Been there, done that. Our real curiosity was Whistler. You may remember that Whistler was home to many of the 2010 Winter Olympics events.

We didn’t have a lot of time, but we decided to scope out the town for a possible future hiking trip. Whistler, we were told, has some good hiking with some similarities to Switzerland, which we love…namely, a nice restaurant at the end of a hike. I’m all for roughing it to a degree, but I have my limits! A nice apple strudel with vanilla sauce is perfect post-hike, thank you.

To get to Whistler from Vancouver, we opted to take the Rocky Mountaineer train. It’s pricey, I won’t kid you, but what a way to go! We didn’t have to deal with traffic, and each car had a “host” who served food and drink, provided commentary and history, and made sure we stayed comfortable. 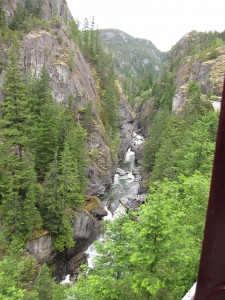 The friendly Canadians like to come out and wave as the train goes by, and I kept quite busy waving back.

Once in Whistler, we had a few hours to wander the town. We chose to visit the Squamish Lil’wat Cultural Center, where we learned about these two First Nations tribes, which have coexisted deep into history. We had lunch at the center. I enjoyed a nice hunk of wild salmon on fresh greens with a side of bannock (fry bread), and hubby had venison chili. Yum!

Then, a peaceful train ride back, where we got another perspective of the spectacular scenery. No misadventures on this trip! Turns out that the Rocky Mountaineer runs to Banff, Jasper, and other points in Western Canada that we want to explore. I’m sure there will be many more trains in my future.

Who knows, Nadine. You and I may have been on the same Branson train, terrified of the bandits. That was one of my most memorable moments out of all of our trips to the Ozarks.

Your train day in Vancouver sounds ideal. The trains in France, for the most part, are good. I’m a little surprised that many of the regional trains there, though, are newer and more comfortable than the TGV.

Wouldn’t that be funny, if we were on the same train? Hilarious. My family used to go to the Ozarks a lot, too. I took a solo trip when I was 19, and I think that’s the last time I’ve been.

In France, we took a train to Chartres and to Versailles. As I recall, those trips were quite pleasant. Of course, that’s less drama for the blog! 🙂

I enjoyed taking a train trip with you! I love trains, too, though it has been years since I’ve been on one. When I was a small girl, we went to an amusement park in Salem, Virginia. On the train ride through the park, “robbers” attacked the train, too, and I felt nervous, too. When I was a bit older, on a school trip we rode the train for a 15-minute trip from the next county to Lynchburg. Loved that. When I was 13, my family and I took two trips on Amtrak–one to Philadelphia and one to New York… Read more »

Thanks for sharing your train memories! Seems like trains bring out the nostalgia for a lot of us.